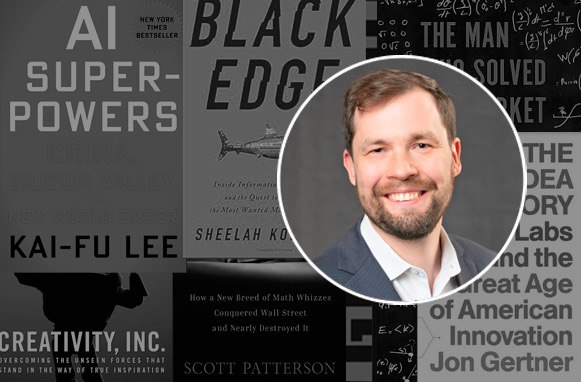 Dmitriy Muravyev, a professor at the University of Michigan and NES graduate, prefers books about humans rather than about models. His library contains volumes about the people who created the modern world of finance. Dmitriy also shared a list of his favorite podcasts.

Stories of People Who Hacked the Market

A Man for All Markets: From Las Vegas to Wall Street, How I Beat the Dealer and the Market (2017), Edward Thorp

This is an autobiography of a legend in the world of finance. Edward Thorp, a math professor at MIT, first figured out ways to beat casinos at blackjack and roulette. And then he has beaten the market, creating one of the most successful hedge funds in history. Thorp suggested a model for options pricing two years before the famous Black–Scholes formula. He is one of the fathers of quantitative investing, an approach based on the use of mathematical and statistical methods. This is far from an exhaustive list of his achievements. In the book, Thorp gives useful advice to investors, explaining, for example, why active investors cannot expect higher profits, even though they take on greater risks. Minimizing risk through diversification is one of the reasons why it makes sense to buy an index, but an even more important reason is reducing the fees investors have to pay, Thorp says.

And another useful piece of advice that concerns not only investors, but also people borrowing money is the following: imagine the worst possible scenario and think carefully whether you can manage it. If the answer is negative, then you need to reduce the amount of your debt.

Black Edge: Inside Information, Dirty Money, and the Quest to Bring Down the Most Wanted Man on Wall Street (2017), Sheelah Kolhatkar

It is a fascinating story about the famous businessman Steven Cohen who has built SAC Capital Partners hedge fund, and how regulators tried to send him to jail for insider trading. The New York Times described this book as a modern version of Moby-Dick with eavesdropping instead of harpoons. Cohen, who was called the "Al Capone of the investment business", became the inspiration for the main character of the Billions TV series. In addition to the enthralling plot, the book clearly shows that access to confidential information is one of the keys to constant success in the stock market.

More Money Than God: Hedge Funds and the Making of a New Elite (2010), Sebastian Mallaby

The Wall Street Journal called the book the most comprehensive account of the murky business that changed the world. Mallaby begins with the story of Alfred Winslow Jones, the creator of the first hedge fund, and tells that it was the man who neither went to a business school nor had a PhD in quantitative methods in finance. Jones worked on a tramp motorship, studied at a Marxist Workers' School in Berlin and did secret assignments for an illegal anti-Nazi group known as the Leninist Organization. He married, divorced, and then married again to spend his honeymoon on the front lines of the Spanish Civil War, traveling and drinking with Dorothy Parker and Ernest Hemingway. Mallaby describes the most famous hedge funds and their managers – people who have become the new American elite and staged the final act of the fancy ball of creativity and greed that are pushing the American nation.

The Man Who Solved the Market: How Jim Simons Launched the Quant Revolution (2019), Gregory Zuckerman

This is another story of a mathematician who became a financial market person. At the dawn of his career, Jim Simons worked at the National Security Agency, where he was deciphering secret codes and from where he was fired for his criticism of the war in Vietnam. He became one of the leading mathematicians of his generation, at the same time trying himself in investing. Simons did not come to success quickly, but in the end, it was a stunning success. He created the legendary Renaissance Technologies, and his Medallion fund made history as the most successful and at the same time the most secret. The Financial Times called Simons "the smartest of billionaires," and The Economist tagged him as the most successful investor of all time. Jim Simons hired outstanding mathematicians, physicists, and astrophysicists. And he was against writing this book till the last moment.

The Quants: How a Small Band of Maths Wizards Took Over Wall Street and Nearly Destroyed It (2010), Scott Patterson

Journalist Scott Patterson introduces one of the heroes of his book Edward Thorp as the godfather of quants who became the first math genius to guess how to make millions on Wall Street with the help of his skills. Meanwhile, Jim Simons is described as a misanthropic, very secretive billionaire with mysterious investment techniques that were developed by academics enticed from cryptanalysis and computer speech recognition labs.

Patterson writes about famous financiers, and his book is a brief history of quantitative analysis that is now the basis of all major investors’ methodology. These people used different methods, but there was something in common, Patterson notes: the work always turned into a fascinating task of searching for an illusory supernatural substance, about which the quants sometimes spoke in hushed, awe-filled voices and which they called the Truth. It was the ultimate secret of the structure of the market, and it could be revealed only with the help of math. Once discovered with the help of vague models of market behavior, it could become the key to unimaginable treasures. Every dollar earned turned into a small proof that they, as academics, stick to their promises and are getting closer to the Truth.

How did the quants, with all their genius and their fortunes, not notice signs of an impending catastrophe that the global financial crisis was? Patterson finds the answer in the history of Isaac Newton, who lost a fortune during the collapse of the South Sea Company, a Ponzi scheme of the time. "I can calculate the motion of heavenly bodies, but not the madness of people," Newton admitted.

This is another book about how people with very different backgrounds have achieved success in the financial market using very different approaches to investment. The volume consists of interviews with 15 of the most successful hedge fund traders.

Ed Catmull dreamed of making the first computer-animated movie. His book is about the difficult path to this dream and things that helped Pixar to make a revolution in the motion picture industry. One of the founders of Pixar recalls the history of the studio, including the creation of its most popular films and sale to Walt Disney Studios. He also shares his experience of working with creative individuals and going through changes ("Fear of change – innate, stubborn, and resistant to reason – is a powerful force"). The authors of the book talk a lot about the reasons for success and failure: when companies are successful, it is natural to assume that their success is a consequence of the right decisions of their leaders who develop their success, confident that they have managed to find the right strategy. However, people need to understand that in fact, randomness and luck played a key role in that success. And also, "if you aren't experiencing failures, then you are making a far worse mistake: you are being driven by the desire to avoid it. "

A renowned visionary and expert in the field of artificial intelligence explains what factors helped China get really close to the United States in this area and what we can expect in the future. This future may actually happen much earlier than we expect: economic development through disruptions driven by the use of artificial intelligence is taking place faster than ever before in history, Lee believes.

A century ago, the spread of electricity and electrification were facilitated by four elements, Lee notes: availability of fossil fuels, entrepreneurs, engineers, and government support. Putting artificial intelligence – "electricity" of the 21st century – at the service of humanity requires rich data, entrepreneurs, AI specialists and government support. Artificial intelligence, Lee warns, will consolidate the incredible wealth accumulated by a few companies in China and the US. It will pose a risk of major social upheavals and the collapse of political systems due to mass unemployment and growing inequality.

Lee believes that the challenges are very serious, but manageable. The outcome of this crisis is not predetermined. He explains the very threat of its occurrence by an ideology that defines the role of a person only as a sum of economic indicators. And he adds that we do not need to spend our lives diligently accumulating wealth so that after our death it will go to our children, whose life will be just a new iteration of a universal algorithm. If we believe that the meaning of life is not limited to the pursuit of material well-being, then AI may just be an instrument that could help us better understand its meaning. Lee calls for leaving machines with the role of machines and letting people be people.

The risks arising from the spread of artificial intelligence are also covered in an article by Daron Acemoglu, a Professor of Economics at MIT and a best-selling author. From undermining competition to a blow on democracy, the current use of AI creates a great range of risks. "It would be naïve to expect that unregulated markets would make the right trade-offs between societal ills and profits from monopolisation of data," Acemoglu states.

Listening instead of Reading

A podcast by Steven Levitt, a well-known American economist and co-author of the international bestseller Freakonomics.

How I Built This

A podcast by NPR journalist Guy Raz and one of the most popular podcasters, according to The New York Times. Since 2016, more than 400 episodes have been released, touching upon a variety of topics – from the music industry to business.

"The best Branded Podcast", according to Adweek 2020. Its official description is the following: "Stories from the people behind the pioneering research and pivotal breakthroughs at the University of Chicago."

A podcast by Tyler Cowan, a Professor of Economics at George Mason University.

One of the best episodes was the one with Aswath Damodaran, a Professor of Finance at the Stern School of Business at New York University. 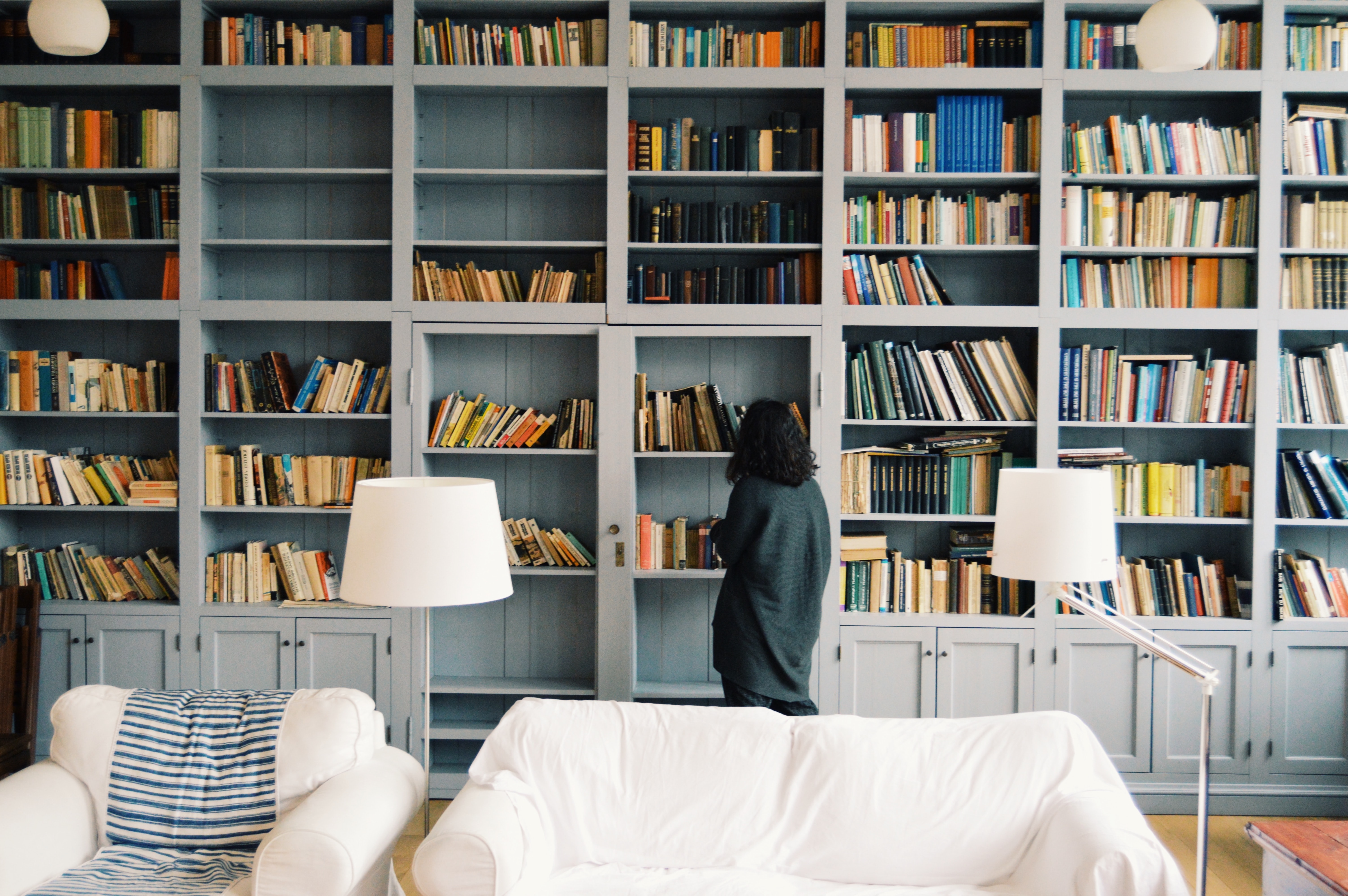 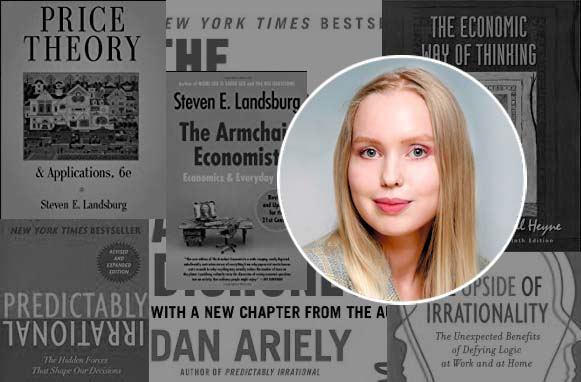 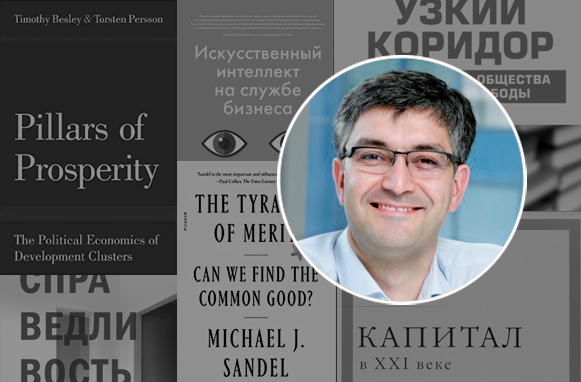 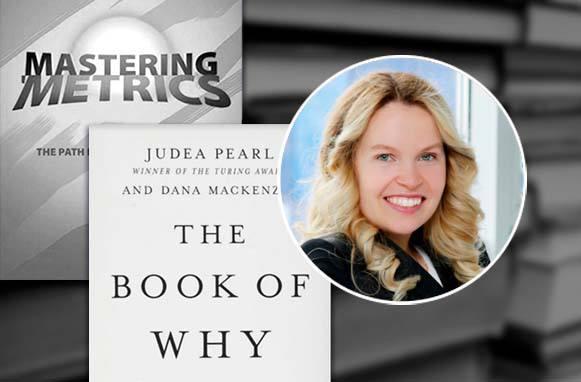 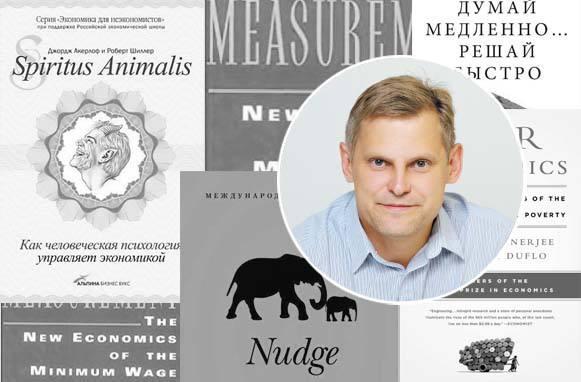 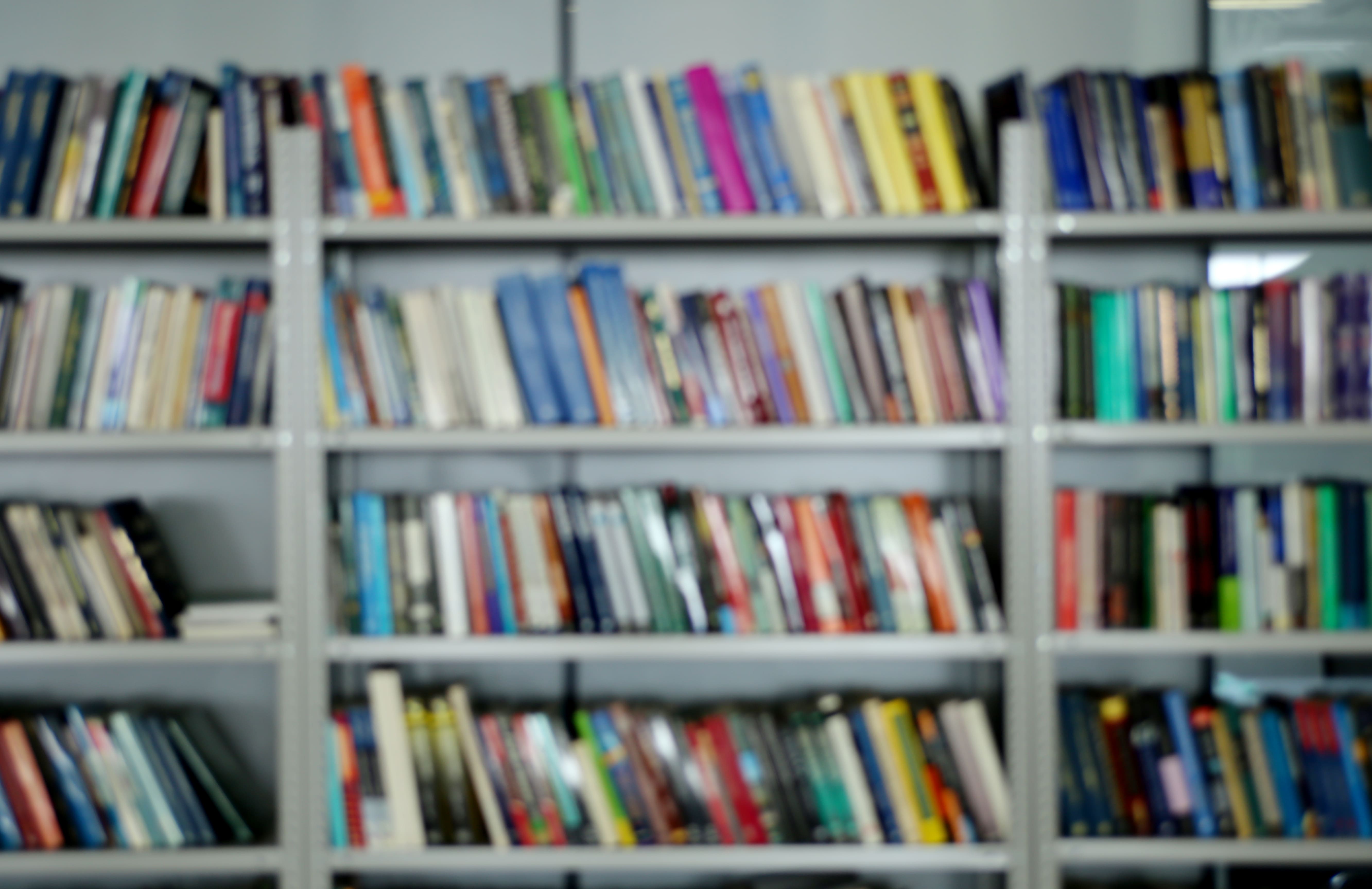 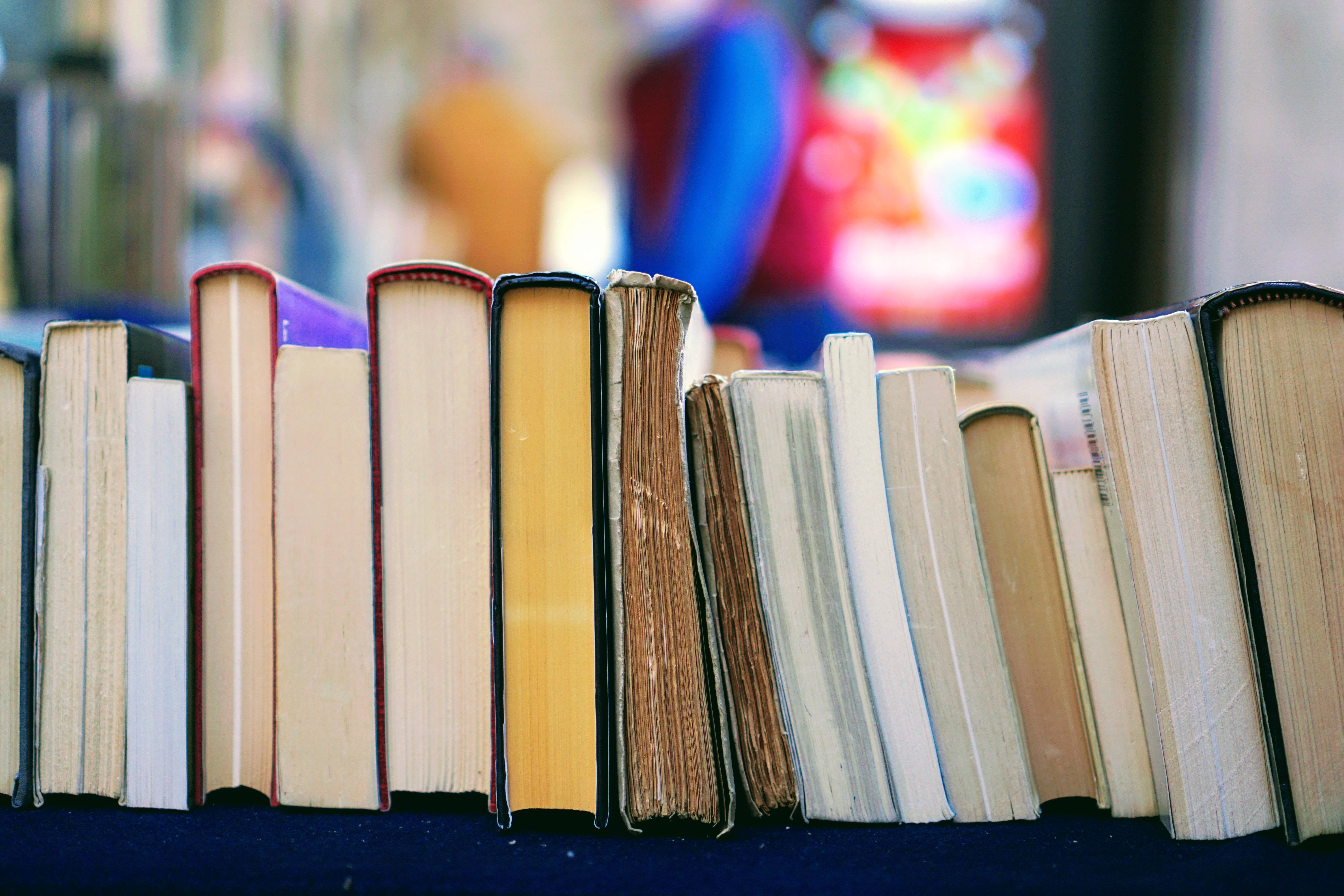 Reading List: Books that Teach in a New Way
More